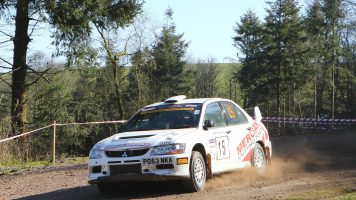 The leaders head to Carlisle…!

After setting out on the Somerset Stages Rally in mid-April, contenders for the 2017 MAXXIS MSA English Rally Championship reconvene in Carlisle for the second event in the new eight-round calendar, and it’s from here that the ties in the points table, always experienced after the first round of a class-based series, will begin to disappear.
Following the opening encounter Ed Fossey (Yaris), David Bennett (Corsa), Pat Naylor (Lancer EVO 9), Stephen Petch (Fiesta WRC), Rob Dennis (Escort Mk2) and Toni Carannante (Subaru Impreza) have all been dining out on the strength of their joint leadership of the MAXXIS MSA English Championship. Now, as Round 2 is upon them, they’ve got to do it all again to stand any chance of maintaining their positions at the top. Close behind them, those competitors sharing 7th place are only two points behind, those sharing 12th place three points behind, those sharing 16th place four points in arrears and so on. Hence, either a calculator or considerable aptitude for mental arithmetic will be a prerequisite on the day!

All of the current leaders are also leading their respective classes, whilst last year’s English Rally Champion Sam Bilham is the leading Junior driver and Tom Murphy is the leading Junior co-driver.
A full list of all the MAXXIS MSA English Rally Championship points is published in the Competitors Section.
The first car leaves the start of the Carlisle Stages at 8.00am on Saturday 10th June and cars are due to begin arriving back at the finish at H & H Auctions on the outskirts of the city from 3.00pm.  Further details of the event at: http://racrally.org/dmack-carlisle-stages/index

After the Carlisle Stages the championship then moves to the unique double header weekend on 9th / 10th July which gives competitors the choice to compete on either or both the Nicky Grist Stages (Saturday) and the new Nicky Grist Acropolis Rally offering 74 miles of asphalt stages on the Epynt Ranges (Sunday).

Thanks to the continuing support from the organisers of Dayinsure Wales Rally GB and their Road to Wales initiative, there is now a super prize of a free entry in the 2017 Wales Rally GB National Rally on 27th – 29th October for the winner of the 2017 MAXXIS MSA English Rally Championship.