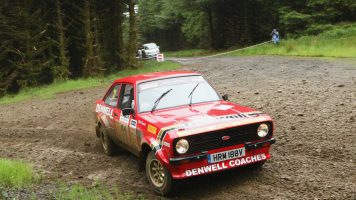 The 2017 MAXXIS MSA English Rally Championship reaches the final round on Saturday 30th September with a visit to the Trackrod Forest Stages in North Yorkshire.

Stephen Petch and Michael Wilkinson (Fiesta WRC) have been among the leaders of the Championship since the Somerset Stages back in April, and they have continued to pile the pressure on all their rivals with a string of excellent results on both gravel and asphalt surfaces.  So much so that they arrive at the Trackrod Forest Stages as the de facto English Rally Champions, as the only remaining crew who had an outside chance of overhauling them if they had a problem on the final round, Callum Black/Elliott Edmondson (Fiesta R5+), have elected to focus their attention on their forthcoming Wales Rally GB entry and have excused themselves from the trip to Filey.

A maximum of 20 points can be awarded in each of the eight English championship classes and with additional points available up to a maximum of 25, Pat Naylor/Ian Lawrence (Mitsubishi Evo 9) could still find themselves overhauling Black/Edmundson for the runners-up spot.

The permutations for most of the class awards are even more complicated but, in addition to those already mentioned, the names of Bart Lang, William Hill, Barry Jordan, Andy Davison, Robert Dennis, Ashley Davis, Richard Sykes, Russ Thompson and Sacha Kakad among many others, are certain to all be in the mix.  Calculators at the ready!…

The event, which is also the final round of the 2017 RAVENOL BTRDA Rally Series and the MINTEX British Historic Rally Championship, has attracted an entry of over 130 crews. The first car leaves the start of the Trackrod Forest Stages from Filey Country Park at 8.30am on 30th September. On the menu are 45 miles of single-use special stages in Langdale, Staindale, Gale Rigg Cropton, finishing off with a final blast through 11.6 miles of Dalby Forest.

Answers to all the questions posed above will hopefully be available shortly after the cars begin arriving back at the finish, down on the sea front at Filey, from around 3.00pm onwards!