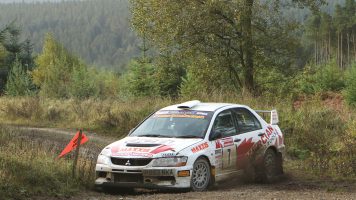 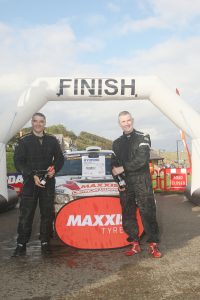 9).  Thompson had the misfortune to retired at the end of the first stage but it still remained a very close contest throughout the day, with Naylor/Lawrence eventually coming out just 6 seconds ahead. This result earned them sufficient points to move up to second overall in the championship.

In class E2 for cars up to 1400ccc, the pre-event favourites Dave and Toby Brick (Nova) were leading the class until the last stage when they succumbed to mechanical issues, allowing 19-year-old Ed Fossey accompanied by Chris Sharpe-Simkiss (Toyota Yaris) to take the class win on the event and in the final championship standings.

In 2017 the MAXXIS MSA English Rally Championship was opened up to all types of rally car and included 8 championship classes but retained a scoring system which reflected achievement against other competitors in the same class.

The awards for the MAXXIS MSA English Rally Championship will be presented along with the BTRDA Rally Series awards at the 2017 Dinner and Awards Ceremony which will take place on Saturday 6th January 2018 at the RAMADA Penns Hall Hotel, Sutton Coldfield, West Midlands. B76 1LH.    Ticket Application forms will be available soon.

The photo above is of the 2017 MSA English Rally Champions Stephen Petch and Michael Wilkinson on the Trackrod Forest Stages (note the new Gold roof).     The inset photo is Pay Naylor / Ian Lawrence at the finish of the event.       Photos courtesy of ralliphotoswales