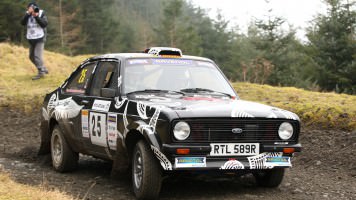 A Class based society !….

In the hotly contested E5 class Gavin Edwards / Caron Tomlinson (Escort Mk2) took an early lead and despite the best efforts of Boyd Kershaw / Bryan Hull also in an Escort Mk2, they maintained the upper hand, eventually finishing 10sec ahead and an excellent 12th overall. In class E2 the pre event favourites Dave Brick / Keaton Williams (Vauxhall Nova) had built up a substantial lead but they unfortunately retired on the very last stage with a mechanical problem. However, it was not all bad news for the family as sons’ Freddy and Toby Brick also in a Vauxhall Nova inherited the class win.
James Hutchins/ James Hood (Vauxhall Nova) again took the maximum points in class E3 ahead of Tim and Kit Leigh (Fiesta R200), whilst local competitors Chris Hickman / Glyn Thomas (MG ZR) were first in class E1 for standard cars up to 1400cc thanks to some impressive times on the tarmac Porlock stages. However, the closest battle again came in class E4 where there were 7 identical Fiesta ST’s in competition. This contest was again won by Cameron Davies / Lee Taylor ahead of George Lepley / Arwel Jenkins.

68 drivers have scored Championship points so far and class wins on the Somerset Stages see James Hutchings (Vauxhall Nova) and Cameron Davies (Ford Fiesta ST) tying for the lead at the top of the table. The Ford Escorts of Boyd Kershaw and Gavin Edwards are joint 3rd, with George Lepley’s Fiesta in close attendance. From the 1400 class, Freddy Brick’s Nova is currently 6th. Meanwhile Cameron Davies and Freddy Brick are tied at the head of the Junior Drivers table.

A full list all the Championship points are published in the Competitors Section. MAXXIS MSA English Rally Championship Points

The next event in the Maxxis MSA English Rally Championship calendar – the Carlisle Stages in early June – sees all the contenders migrating north to take up the challenge of the exciting stages in the western side of Kielder Forest.  More details of the event and entries can be found at  Carlisle Stages 2016