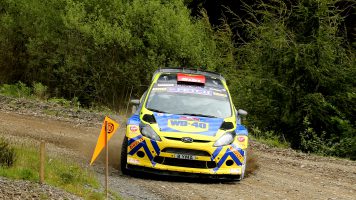 The leaders head to Carlisle…!

MAXXIS MSA ENGLISH RALLY CHAMPIONSHIP – A TOUCH OF CLASS!….
The new-look MAXXIS MSA English Rally Championship set sail on the Somerset Stages and competitors have a wide-ranging calendar of events to look forward to, including a mid-season trio of forays on to asphalt. The Championship has been opened-up to cater for all rally cars compliant with the MSA’s technical regulations and, as is the case with any class-based series, the eventual winner could come from any one of them. It’s also the case that, following the first round, there will be a tie for the lead, i.e. all those who scored maximum points in their respective classes will feature at the top of the points table, and it’s only when the season gets into its swing that talent will out….

So, after just the opening encounter, 62 crews have been credited with points in the MAXXIS MSA English Rally Championship and, unsurprisingly, Stephen Petch/ Michael Wilkinson were the highest-placed runners home in their Fiesta WRC. In their particular class (E8), the Fiestas of Callum Black/Elliott Edmondson and Connor McCloskey are the cars/crews they need to be most wary of, but it’s already obvious that there are others with designs on the silverware!  Class E7 is led by Toni Carannante/Simon Coates who took a class win and a top twenty finish on the event itself in their Subaru Impreza STi.  Whereas class E6 includes many of the BTRDA Production Cup front-runners; Pat Naylor/Ian Lawrence, Russ Thompson/Andy Murphy and Richard Hill/Steffan Evans lead the charge, but there are plenty more of these evenly matched cars where they came from!  Ashley Davies/Sam Fordham rule the roost in class E5 (over 2-litre) in their Escort, while class E4 (up to 2-litre) sees a couple more Escorts in the hands of Rob Dennis/Andy Boswell and Theo Bengry/Les Forsbrook demoting defending ERC champion Sam Bilham (Fiesta ST) and codriver Cameron Fair down into 3rd place at present.

Dave Bennett/Alistair McNeil’s splendid run in their Corsa in Somerset sees them leading fellow 1600cc runners Barry Jordan/James Gratton-Smith (Hillman Avenger BRM) and Bob Vardy/Simon Rogers (Fiesta) in class E3, while the driving forces in the 1400 Championship hold sway in class E2. The current top three are Ed Fossey/Chris SharpeSimkiss (Toyota Yaris), Tommi Meadows/Ian Oakey (Ford Ka) and Rob & Michael Evett (MG ZR), while class E1 is a ZR closed-shop! Chris Hickman/Alex Stanbury, Sheldon Furby/Carrie Rogers and Ian Wollacott/ Simon Stanbury will all currently be dining out on their success but their – and everyone else mentioned above! – joy will be tempered by the knowledge that, with up to 25 points on offer on each of the remaining seven rounds, in the blink of an eye the look of the leaderboard could change significantly!   The complete points table after the first round can be found under the Competitor Section > HERE

Next stop is the Carlisle Stages on 10th June. The event is based at the premises of H&H Auctions in Carlisle close to Jct 43 of the M6, and will cover 43 stage miles in the Kershope and Newcastleton forests, with a 15 mile stage as a finale. These stages are only used on the Carlisle Stages and with a small proportion of double usage it should ensure the best possible road conditions.  For more information and to enter, follow the link to the DMack Carlisle Stages in the Events section.

Thanks to the continuing support from the organisers of Dayinsure Wales Rally GB and their Road to Wales initiative, there is now a super prize of a free entry in the 2017 Wales Rally GB National Rally on 27th – 29th October for the winner of the 2017 MAXXIS MSA English Rally Championship.