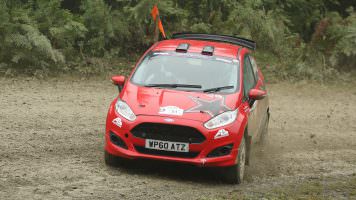 The Trackrod Forest Stages was the penultimate round of the MAXXIS MSA English Rally Championship and the ferocious pace of the event in the Yorkshire forests resulted in a significant change in the fortunes of some of the leading championship contenders. Sam Bilham’s consistency, and a class win on the Trackrod in his Fiesta ST, saw him move into the lead just when it matters!

In the hotly contested E5 class the expected battle between two of the leading championship crews Gavin Edwards / Carron Tomlinson and Boyd Kershaw / Bryan Hull, both in Mk 2 Ford Escorts, did not materialise when Kershaw rolled on the first stage and Edwards retired later in Dalby. This allowed Jody Bowcott / David Millard, also in a Mk 2 Ford Escort, to score a well-deserved class win. Cameron Davies (Fiesta ST), the championship leader prior to the start of the Trackrod, was sidelined when a driveshaft snapped in Cropton which gave the opportunity to Sam Bilham in an identical Fiesta ST to win class E4 and take over the championship lead.

Class E3 for cars up to 1600cc was won by the experienced Barry Jordan / James Gratton-Smith in their Avenger ahead of Bob Vardy / Simon Rogers (Fiesta R2).  Meanwhile the son and father partnership of Jordan and Paul Hone (Proton Satria) were dominant in class E2 to give them their third maximum score and put them in a strong position as the championship reaches its finale.
In the E1 class for standard cars up to 1400cc it was Dominic Hodge / Stefan Arndt (Micra) who led from the start and extended their class lead when Emily and Eliot Retallick retired their Peugeot 205 in the Dalby stage.

In the Junior driver category of the MAXXIS MSA English Rally Championship, Cameron Davies and Sam Bilham both have 84 points ahead of Bob Vardy whilst in the Junior co-drivers it is Tom Murphy who leads the way.

With just one round remaining the championship contest is still wide open with 9 drivers still in with a chance of taking the title. The final round of the 2016 MAXXIS MSA English Rally Championship is the MEM Malton Forest Rally on Sunday 6th November.

Photo is Sam Bilham and James Whitaker on the Trackrod Forest Stages.     Courtesy of RalliPhotosWales