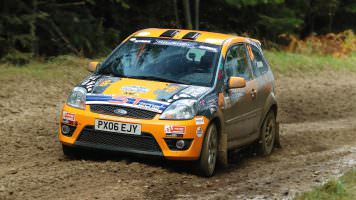 The final round of the 2016 MAXXIS MSA English Rally Championship, the MEM Malton Forest Rally, took place on a very wet and windy day in the North Yorkshire forests on Sunday.  The event was set to the Championship decider with both Sam Bilham (Fiesta ST) and Robert Vardy, in last years championship winning Fiesta R2, vying for the Drivers title.

At the end of a very challenging event Vardy along with Caron Tomlinson who was a last minute stand in co-driver, finished just 14 seconds and one place ahead but that result was still sufficient for Sam Bilham to maintain his championship lead and take the 2016 drivers title with Robert Vardy finishing in the runners up spot.

Amongst the other MSA English Championship crews to do well on the event were Paul Street and Ian Jones (Escort Mk2) who were the leading Class E5 crew, and Charlie Barlow and Dale Furness (Micra) who won their class and took maximum points in Class E2.

So, at the end of another competitive season it is Sam Bilham who is the Maxxis MSA English Rally Champion driver, with Ron Roughead taking the co-drivers title. Meanwhile in the English Junior Drivers table Robert Vardy came out just ahead of Sam Bilham.

The awards for the MAXXIS MSA English Rally Championship will be presented along with the BTRDA Rally Series awards at the 2016 Dinner and Awards Ceremony which will take place on Saturday 7th January 2017 at the Radisson Penns Hall Hotel, Sutton Coldfield, West Midlands. B76 1LH.     Ticket Application forms can be downloaded at http://www.btrdarally.com/information