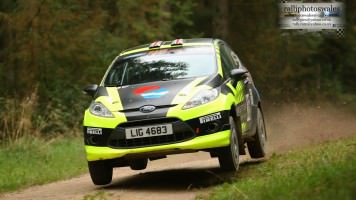 Following its traditional summer break, the MSA English Rally Championship moves into the second half of its season. With current leaders Ryan Weston / Mark McCullock missing this event, Keith and Mairi Riddick (MG ZR) are the leading championship crew present on the Woodpecker, followed by Dave Bennett / Alistair McNeil (Corsa) and Kieran Darrington/Pam Mitchell (Corsa). It is definitely a case of 1400s ruling the roost at the moment but, with a class-based Championship, the eventual winner could come from any one of the five capacity classes.

One of those class leaders is Rhys Yates (Fiesta R2) who currently at the top of Class E3 and who already has two maximum scores.  Meanwhile Dave and Freddy Brick (Nova) also scored maximum points on the Carlisle Stages and will want to make their local knowledge pay (you can see their farm from the Rally HQ)

The Eventsigns Woodpecker Stages, which is based at Ludlow Racecourse, has attracted 66 MSA English Rally Championship crews. The first car starts at 8.30am on Saturday and returns for Service during the day before the crews begin returning to Ludlow Racecourse for the finish from 3.40pm.