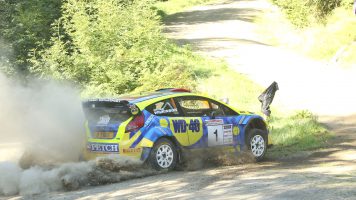 As far as contenders for the MAXXIS MSA English Rally Championship are concerned, the Woodpecker Stages represents a return to forest rallying after the option of three consecutive asphalt events. This year’s Championship has been completely revamped and, while still class based, crews in any vehicle complying with MSA Technical Regulations are eligible to score championship points.

After a good run on the Tyneside Stages over the Otterburn Military Ranges, Stephen Petch and Michael Wilkinson currently hold sway at the top of the Drivers and Co-drivers points tables but, as every competitor is pitted against those in his/her class, it’s just as feasible that the eventual winner could come from one of the smaller capacity classes.  In 2016 Sam Bilham, in his 2-litre two-wheel drive Fiesta ST, was victorious and there’s no saying that a similar giant-killing act will not be performed by someone this time. We’ll know all by the end of September!…

Thanks to the continuing support from the organisers of Dayinsure Wales Rally GB and their Road to Wales initiative, there is also a super additional prize of a free entry in the 2017 Wales Rally GB National Rally on 28th – 29th October for the winner of the 2017 MAXXIS MSA English Rally Championship.

Bart Lang / Sinclair Young (Micra) have now secured an unassailable lead in class E1, but in the seven other competition classes it is still all to play for with the Woodpecker and the Trackrod Forest Rally to come.   All the latest championship points can be viewed in the Competitors section. (best 6 scores to count)

Photo is Robert Dennis / Andrew Boswell on the Carlisle Stages. (Courtesy of ralliphotoswales)