This Newsletter was published after the 75th Scottish Rally and has been e-mailed to all registered Competitors, Event Organisers and Championship Sponsors.

This Newsletter has been issued after the 2021 Nicky Grist Stages and has been e-mailed to all registered Competitors, Event Organises and Championship Sponsors.

This Newsletter is to update / confirm a number of items in advance of the Nicky Grist Stages on 10th July which is now the 1st round of the Motorsport UK 2021 English Rally Championship, in associated with Seacon UK.

NB: Entries for Round 1, the Nicky Grist Stages, open from 6pm on Monday 24th May. For the first few days entries have been reserved for 2021 Championship registered crews, so don’t delay registering for the BTRDA Rally Series / English Rally Championship and submitting your event entry.

A list of all the MAXXIS Motorsport UK 2019 English Rally Championship award winners.  These awards will be presented along with the BTRDA Rally Series Awards at the 2019 Dinner and Awards Ceremony which will take place on Saturday 11th January 2020 at the Drayton Manor Hotel, near Tamworth, West Midlands. B78 3SA.

More info and the booking form can be found HERE

DOWN in the FOREST SOMETHING STIRRED…!

The MAXXIS Tyres Motorsport UK 2019 English Rally Championship reaches its climax in the picturesque Forest of Dean on 9th November with the running of the Wyedean Stages Rally. From the start in Mitcheldean, a total of 42 miles of special stages – 3 stages each run twice – await the 80 crews on the entry list. 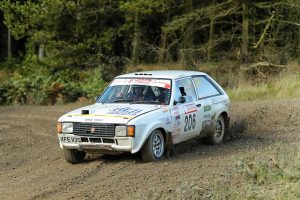 <<<<<<  Andy Davison/Tom Murphy, currently occupying 2nd place in the English Rally Championship points table and leading Class E4, will be journeying down from Middlesbrough with their rapid Talbot Sunbeam VXR which has already scored two maximums this year – and now a third would do their title aspirations no harm at all!
Pitted against other cars in its class, Steve Black/Paul Morris’ Suzuki Swift (Class E2 leaders) has been improving all season, culminating in a maximum last time out on the Trackrod Forest Stages. (see main photo).   As with their rivals, maintaining a 100% finishing record on the Wyedean Forest Rally is imperative.

Fellow E2 contenders Chris Powell/Jim Lewis have forsaken their Talbot Sunbeam for the four-wheel drive turbo-charged power of a Subaru Impreza for their last outing of the season.
Tim Phelps/Elwyn Manuel have made Class E5 (nearly!) all their own so far – their 2.4 litre-engined Escort has three maximums and one second place, such that all they have to worry about is their overall end-of-season position. No pressure, then!… 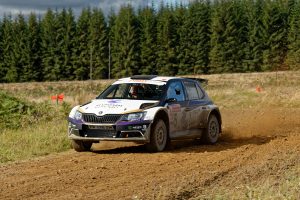 and the Mitsubishi Lancer EVO9s of Matthew Hirst/Declan Dear and former BTRDA Production Cup Champions Russ Thompson/Andy Murphy in class E7.  In addition to Phelps/Manuel, Ford Escorts appear in the hands of Ben Friend/Cliff Simmons, Jonathan Brace/Paul Spooner and Robert Smith/Frankie Hillman. Stuart Spyer/Pete Williams will be hoping to show Steve Black a clean pair of heels in their 1400cc Vauxhall Corsa and Richard Wells/Tom Wood are relying on a Fiesta R2 to bring home the silverware in their class!

As far as the final Championship positions are concerned, all will become clear during the afternoon of 9th November as the survivors begin arriving back in Mitcheldean at the conclusion of the event.

After four years, it’s time to say ‘goodbye and thank you’ to MAXXIS Tyres as their tenure as headline sponsor draws to a close. As a class-based series, the winners during this period have been in a variety of different cars as, unlike most other Championships, it’s not necessarily the most powerful that will actually prevail. For example, Sam Bilham’s Group N Fiesta ST was victorious in 2016, while Stephen Petch’s Fiesta WRC claimed both the BTRDA Gold Star & English crowns the following year. Outgoing English Rally Champions Ian Joel/Graeme Wood put their trusty Ford Escort Cosworth to good use, rounding off the season with 5th place overall on the Trackrod Forest Stages in September 2018.

This Newsletter was issued after the Trackrod Forest Stages has been e-mailed to all BTRDA Rally Series and Motorsport UK English Rally Championship competitors, sponsors and event organisers.

This Newsletter was issued after the Woodpecker Stages and has been e-mailed to all BTRDA Rally Series and Motorsport UK English Rally Championship competitors, sponsors and event organisers.